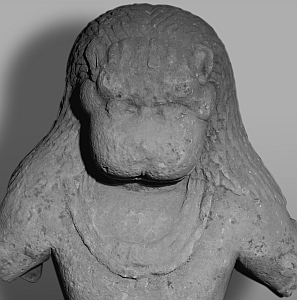 Another highlight of the Harisingh Gour Archaeological Museumof Sagar University:

According to the Purāṇic myth, Viṣṇu took the half man, half-lion form of Nṛsiṃha to destroy the demon (asura) Hiraṇyakaśipu, who was harassing the gods. Hiraṇyakaśipu had obtained several boons from Brahmā, rendering him so invulnerable that he could not be killed neither by man nor beast, neither in the day nor by night, neither inside the house nor outside it and no weapon could do him injury. Having been granted all this, Brahmā was helpless against Hiraṇyakaśipu when he turned against the gods. At the same time, Hiraṇyakaśipu’s son Prahlāda was an ardent devotee of Viṣṇu. Disliking his devotion, his father subjected Prahlāda to various forms of cruel treatment; nevertheless, Prahlāda continued to preach that Viṣṇu was an omnipresent, omniscient and omnipotent god. In a rage of anger, Hiraṇyakaśipu told Prahlāda to show Viṣṇu in the pillar of the palace if he was omnipresent. Prahlāda struck the pillar (or Hiraṇyakaśipu himself kicked it) and then Viṣṇu emerged from it in a form half-man half lion, and tore Hiraṇyakaśipu up with his claws, at twighlight, sitting on the threshold of the demon’s palace, thus circumventing his invulnerebility.

The Nṛsiṃha image is described with a lion face and a human body in the Viṣṇudharmottara (III, 78, ff). The deity should have broad shoulders, hips and neck, slender waist and a small abdomen. He should be in the ālīḍhāsana posture with the demon Hiraṇyakaśipu lying on his knees. Nṛsiṃha should be tearing the belly of the demon with his sharp nails. Or, he should hold the attributes of Viṣṇu, i.e. the discus (cakra), conch (śaṅkha), mace (gadā) and lotus (padma), with a mane looking like curly flames of fire. He should be devoid of ornaments.
In the Āgamas two major iconographic types of Nṛsiṃha are recorded; Girija Nṛsiṃha and Sthauna Nṛsiṃha. The former is seated in meditation, and therefore also called Yoga-Nṛsiṃha or Kevala-Nṛsiṃha. Sthauna Nṛsiṃha should have a thick mane and four arms, holding cakra and śaṅkha in the upper hands and the front right hands should be in the fear dispelling (abhaya) or boon giving gesture (varada mudrā). Another manuscript version of the Vaikhānasāgama describes Sthauna Nṛsiṃha as ripping open the belly of Hiraṇyakaśipu.

In the Gupta Era, not only Varāha but also the Nṛsiṃha incarnation of Viṣṇu gained popularity in Central India. The Gupta type of the Nṛsiṃha image standing serenely without any reference to Hiraṇyakaśipu in a way similar to this image from Pahlejpur is known at other places in Madhya Pradesh as well; this sort of Nṛsiṃha depictions has apparently nothing to do with the descriptions of the texts. However, this type of representation as a placid aspect of the Nṛsiṃha image has been referred to as the Kevala-Nṛsiṃha type. The features of the sculpture presented here are remarkable and shared by the sculpture of Eran, still in situ and the sculpture from Badoh, now kept in the Central Archaeological Museum Gurjari Mahal Gwalior (Acq. No. 35). Nṛsiṃha stands straight in the samabhaṅga posture. The body is that of a male, solid and strong, and the bust is particularly powerful with broad shoulders and strong and thick arms. The image used to be four-armed but the arms are truncated, so we have no information about what the hands may have

originally held. The waist and the hips of Nṛsiṃha are slender, so are the legs. The head is that of a lion, turned somewhat downwards, with a broad mouth, bulging eyes, and rounded ears. The thick mane is treated with a particular care, arranged in neat rows of rhomboids indicating tufts of hair. The figure is ornamented with a broad necklace and garland (vanamālā), parts of which still remain at the waist and on the back side of the figure, consisting of finely carved forest flowers. Nṛsiṃha wears a short lower garment fixed on the hip with a girdle twisted and fastened in a large artistically-depicted knot on the left side, seen from the back. The folds of drapery fall down between the legs and under the knot on the left side.

This image of Nṛsiṃha is a particularly fine specimen of Central Indian Gupta sculpture. In its overall conception, the way it ingeniously unifies realistic and idealized features, as well as in the way detail is executed, such as in the mane, the garland or the manner of representing the garment it fits perfectly into the Gupta idiom and displays the high level of artistic achievement of Central Indian sculpture in the Gupta period.